This time, last year, I went to England to meet Jane Austen.  I was nervous, and with good reason since I’d taken the liberty of writing about our relationship, even though we’d never met.  I ran the terrible risk of discovering I’d based my book on a deep misunderstanding .  Five years of my life could go down the drain.

Not to mention what Agent would say.

Flying to England, I’d considered myself in the same league as Elinor Dashwood and Fanny Price.  Upon landing, it occurred to me that neither Elinor nor Fanny would presume to write first, ask questions later.  I could already feel the sharp end of Jane Austen’s pen, and imagine myself exiled to Portsmouth.   Driving on the wrong side I asked myself how a lowly Mature Debut Author like me could presume to be freinds (I know) with a Sustained Supernova whose immortal blaze cuts across languages, centuries, and planets for all we know.  What was I thinking?

I met Jane Austen’s front door.  She was not there. 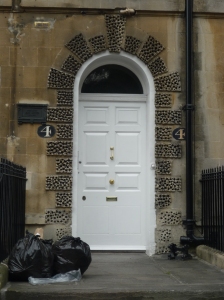 I met Jane Austen’s crowded museum.  She was not there, either.

But then we drove to Chawton.

Everything in Jane Austen’s village is life-size or smaller.

Standing in the simple room where the modest writing-table occupied a spot near the window, I felt My Jane Austen’s presence.  Not the celebrity icon, but the unaffected woman reined in by class, money, and gender.  The writer who nailed Aunt Norris while Mrs. Austen and Cassandra did chores.  Jane Austen was the person I had imagined: physically present at the little table, yet mentally far away, working in a universe of her own creation.  And this is what we both understand:  being stranded on a desert island is not a problem as long as you have paper, pen, and writing-table.

Her writing-table is the most unassuming piece of furniture with the most impressive back-story I’ve ever met. 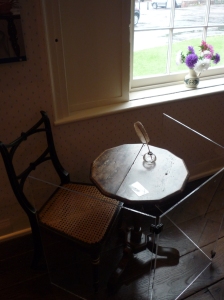